Over the past few weeks I have trained two teenagers through my program Modern Manners for Today.  They are both highly intelligent young adults but in both cases their mothers felt that their social skills could use assistance, not only to encourage greater participation in the social life around them, but to help them in gaining confidence.
The first client, aged 16, has been accepted to attend Magdalen College in Oxford this year.  She is extremely bright but socially very young for her age.  She is very pleasant but with virtually no social skills and a tendancy to say whatever comes to mind at the time.  She has few friends and spends a great deal of her time in chat forums on the internet with like minded people. 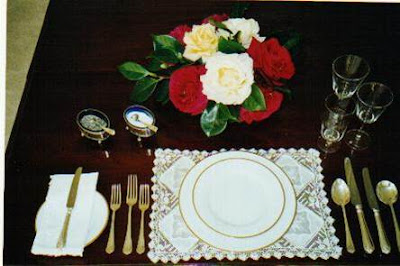 A formal western table setting (photo LP)
Perhaps the most surprising aspect of our day together was at the dining table.  Included in my program is a three course formal luncheon.  This young lady had never used a knife and fork...together. And when I suggested that she use the knife in her right hand, she queried why she would do that when she was  right handed and so should use the fork in her right hand as it was a more useful tool. She advised me that her family, with both parents being  busy doctors, never ate at the family table together;  but if they ate at a table it was with a fork, spoon and fingers only.
While in this day and age of McDonalds and other "finger food" outlets there is certainly a place for hand held food, I was astonished that a young Australian of 16 would never have been taught the essentials of western dining etiquette.  After taking some hours at the table encouraging her to try with the traditional cutlery I abandoned any thought of introducing her to the dining etiquette of Asian cuisine...and chopsticks.
At the end of our day together I certainly gained the impression that she had developed some level of confidence in taking her first tentative steps towards understanding the role and requirement of manners in interacting with people, and the situations in which she will find herself, particularly when she arrives in Oxford.
My second client was a young adult of 17 who has recently commenced studying Law and Commerce at a local university.  A most pleasant young man, he was also more content with his own company, his piano, books and coin collection than with his peers. Having been bought up as an only child with his mother, she had contacted me with a view to encouraging him to be more aware of his surroundings and those people with whom he will be attending university. They both spent the day with me also taking the Modern Manners for Today program.
While naturally shy, he certainly contributed to our discussions and was intent on questioning my reasoning on several aspects of etiquette.  He was keen to overcome his shyness and even participated in some role play activities with confidence. 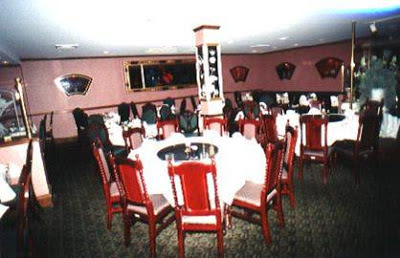 The China Club, Singapore (photo LP)
At the dining table he was open to suggestions.  He and his mother, both being Chinese, only speak Mandarin at home and only eat at Chinese restaurants.  He has little knowledge of western dining etiquette, but through no fault of his mother.  She was adament that she wanted him to have the knowledge and for herself, it was a matter of understanding what to do, why and when and to reconfirm her own knowledge.
I am not surprised that parents of intelligent children in particular want them to be as well rounded as possible. The world is ever shrinking and these brilliant young Australians will be able to work anywhere in the world. I would like to think that I have assisted them with their nascent social confidence.  I requested that  both of these special young people keep in touch.  One of the great pleasures I am able to enjoy at The Percy Institute of International Protocol is to follow the careers of my clients. Young people who have gone on to be Rhodes Scholars have passed through the Institute and it is so very rewarding to follow their journeys. 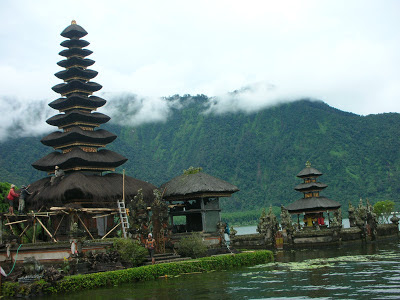 Balinese temple (photo LP 2010)
I have returned in the past few days from a holiday in Bali, Indonesia, with my sister.  Unlike my trip in 2010 when I stayed more remotely in the north west at Pemuteran and  the north east at Amed, this visit was to a five star resort in Legian.
What a difference!  The streets of Legian were very busy, the locals almost outnumbered by the Australian tourists.  I heard very few languages other than “Aussie” spoken and it reminded me that when I travelled with my French boyfriend to the northern part of Bali, I was told by the Europeans I met that they tended to avoid the tourist hubs of Kuta, Legian and Seminyak because of the loud, rude and crude Australians…yes a generalisation about the Aussies, but unfortunately, as I was to learn, a correct one.
A friendly local trying to sell us a toy (photo LP 2012)
It is difficult to write this post without appearing a “snob”.  But having canvassed my ideas with friends, acquaintances, colleagues and clients, an… 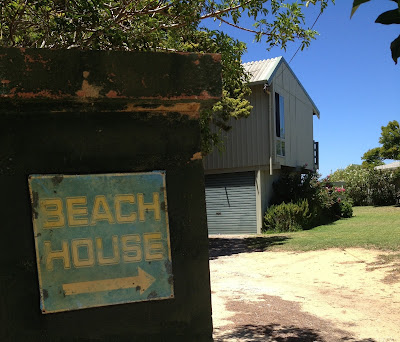 It all started in summer last year. My partner and I were having a two week holiday at my beach house, a good time to get the little jobs done around the house and garden. It is an asbestos clad modular house built about 1970.  I have co-owned it since 1989 and loved it for its rustic, very casual ambience, never worrying too much about maintenance as it was just "The Beach House. Being in the country, at Guilderton 100 kms north of Perth, which is located at the mouth of the Moore River where the river flows into the Indian Ocean, I was advised to have a termite/white ant checkup as the house had not been inspected for some years.
From the moment he arrived the termite expert looked worried..."there's a lot of activity around the garden" (activity being termite trails) and when he finally climbed to the top bedroom and I casually mentioned a bit of a "bounce" in the floor boards, he pounced.  With what appeared to be a moment of almost glee he pulled back… 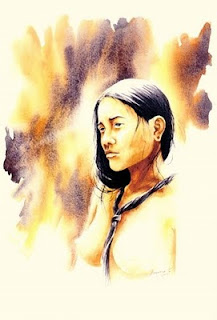 (Artist: Tommy Tamangmed. http://www.yapeseart.com/)
And so, yes, I have returned. The time came for me to leave the “remote” islands of Yap in the Federated States of Micronesia and the tiny nation of Palau and return to western “civilisation”. It has taken a few weeks to readjust to the pace of “modern” life having experienced the tranquillity of living in a mobile phone/ television free environment. The concession of extremely slow and eventful internet connection seemed incongruous in these places of ancient yet vitally living culture.
My spirit is uplifted and my sense of pride in the human ability to share kindness and show good manners has been restored.
Arriving in Yap in the early hours of the morning was exhausting. A tiny airport, tired passengers, equally tired immigration officials but then the first of many Yapese warm and ready smiles in the arrival hall as I was given a beautiful lei by a young girl wearing only a lava lava and a wreath of flowers artfully draped acros…